TV Series and the Internet are getting on fine wouldn’t you say ? The music industry has been cornered into the position of accepting that systems like iTunes are actually working and working well. So why would the movie industry continue to dig its heals in about distributing films over the Internet ? You may think that the whole music industry versus the Internet fiasco was a lesson in itself but no it seems not !
A good article over at washingtonpost.com discusses the illogical behaviour of the movie industry and how hard companies like Apple and Amazon are working on changing this, bringing out boxes that will allow people to view downloaded films on their TVs…

It seems in the same way that book publishers are creating barriers in the online publishing industry to make traditional channels of distribution happy, the movie industry is similarly motivated to create barriers… When will they learn ?

So what do film stars and Web 2.0 have in common ? Read on to see why value is not always where you think it is !

While checking out CNN I came across an article called “Beware the return of the Web Bubble”, which turned out to be about media companies potentially spending too much money for online social networking businesses.
Linked to this article was another called “Star Power fades in Tinseltown”, the same journalist Paul R. La Monica discusses the failures of recent movies with big stars as opposed to the success of movies like ‘Superman returns‘ and ‘The Chronicles of Narnia’. Even though I watched and enjoyed both these movies I truly can’t think of the names of the lead actors.
As the journalist explains, numerous stars, including Cruise and Gibson, are making the headlines for bad reasons, alienating “a large portion of moviegoers”. Indeed, why not go for great writers, special effects and search for new talent. Paying millions for a well known movie star is not proving to be so rewarding.

For the past few years, monstrous box office hits have often been based on comic books, novels and sequels. And most of them have not had featured well-known actors and actresses. The characters and stories have driven the film’s success.

What is the common factor ? ‘Star’ sites of the moment on the Web considered ‘Web 2.0’ and film stars are being paid far too much ! Buying into a company is completely different to paying a well known star to be in your movie, but maybe the glitter of the stars, just like the web 2.0 buzz, is distracting people from the real value.
As Jeffrey Zeldman explains in his “Web 3.0” article, it does seem that the hype around web 2.0 is getting a bit much. ‘Copy cat’ projects with a simple Web 2.0 veneer are popping up like honey pots. As La Monica points out on CNN Money, this could create a vicious backlash, similar to the web 1.0 bubble burst !

Taking these two concepts further, the real issue is savvy business decisions, rather than a cyclic economic trend. When News Corp. bought MySpace they most probably made a great deal. The finance world later realised that News Corp. had swooped in at just the right time, which triggered this grand race to copy them.
The CNN article is more of a warning, just like Zeldman’s web 3.0 article; it shouldn’t be a race it should be business as usual. Rushing into negotiations and paying 20 times the real market value (if there is any value and it’s not just a pale copy) is what lead to the web 1.0 bubble. I recommend Zeldman’s article for a better understanding of the web 2.0 hype.

There is real value out there, regardless of all the hype about web 2.0. Just make sure that you’re buying into value and not hype.

A fascinating article at the New York Times covers the trend that being single is gaining on being married. The article called “Facing Middle Age With No Degree, and No Wife” that spans four pages discusses the factors that have changed the demographics in the US; it used to be that men in their mid 40s were nearly all married.
The article tries to point to education as a key factor that leads men to be loosing their ‘must have’ allure for women. Women no longer need to rely upon men like they did in previous generations. This extract clarifies that idea however :

â€œIt is a mistake to think of this as just happening to the underclass at the bottom,â€ said Christopher Jencks, a professor of sociology at Harvard. â€œIt is also happening to people with high school diplomas or even some college. That is the group that has been most affected by the decline in real wages in the last 30 years.â€

The new freedom that past generations of women have fought for, is often destabilising for both women and men. Education and upbringing is not always in sync with this equality and can lead to the rejection of the other. Women are far less inclined to sit, smile and be docile like was expected of them in previous generations. Men however faced with this new feminine touch sometimes prefer a single life, without the hassle of fighting for a place in the couple. Coping and adapting to their new freedom can be hard for both men and women. As the New York Times article explains women are often interested in a man that can offer better financial prospects :

â€œMen donâ€™t marry because women like myself donâ€™t need to rely on them,â€ said Shenia Rudolph, 42, a divorced mother from the Bronx.

This isn’t about disgruntled divorcees from previous generations that have given up on the idea of finding someone else, it’s a whole new ball game with each player trying to find a place for themselves. Finding a place for yourself in society is also a factor that leads to both men and women putting their careers first and the search for the significant other comes after.
In the comedy “The Devil wears Prada” Glen Close is portrayed as the Thatcher type woman that is as hard as nails, while sneak peaks at her family life try to strip the iron lady image to show a more fragile reality (a bit too simplistic though). On the other hand her assistant rises gloriously to ‘her’ challenge only to find that she has lost her soul in the process (again the film is ‘nice’ but the script here was also far too easy).
“Imagine Me and You” ia an English film with Piper Perabo that I really enjoyed. It compares to a Richard Curtis film (4 Weddings…) but I felt it was more ‘real’ and sensitive while trying to touch on the difficulties couples face today…

Back in real life though, where everything isn’t always perfect, it’s nice to be around normal people. I’m talking about normal people here, as opposed to men or women that can’t communicate properly and blow their tops as soon as life isn’t going exactly the way they want. Where everyone around them gets the wrong end of the stick when they’re feeling down, or they’ve had a bad day, or they just woke up, or you don’t agree with them, or… hey, you get the picture; every other day basically ! My advice when faced with this type, cut them loose and enjoy your life !

Men that don’t change and adapt to this ‘new deal’ are likely to drive women away, just like women that take the equality game too far will drive the men away. It’s completely hypocritical to, on the one hand, sing the benefits of gallantry, expect a man to do all the DIY chores, while also expecting him to do the washing up and cooking in the name of the equality of sexes. It works both ways, women should start looking at doing more DIY in the house if they are really honest about the equality between men and women. In a recent relationship I was told that it was normal for me to do cooking, washing-up and cleaning but that putting a picture up on the wall was a manâ€™s job, it was DIY !

â€œChanging womenâ€™s expectations about what married life should be like has put more tension into these relationships,â€ Mr. Jencks said. â€œMen who have graduated from college have been more responsive and ready to accommodate those changes than those who havenâ€™t.â€

A good friend of mineâ€™s wife recently explained to me that she couldn’t understand why couples put so much pressure on each another. The “high expectations they put on each other just weighs the couple down and makes them resentful of one another when they are unfulfilled. The couple and the relationship need to breathe and too much pressure is suffocating.” 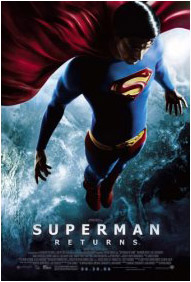 Well, I remember having watched some ceremony where the latest batman actor jabbed at Superman and proclaimed himself the “bad ass” superhero! Yes batman everybody envies a “bad ass”, not! I have yet to see the batman movie (watched 20 minutes once and had to stop for some reason), but Superman Returns was good. I enjoyed and really felt like watching the movie upon reading a critic that said it was for insecure men. With such a dumb comment I thought this film is probably going to be good.

The film actually reminded me of the Marvel comic that I used to read. Superman is portrayed as an average guy on one side and flip the coin to find a real superhero. So there is part of him that you can associate with whoever you are. That’s probably what lead to the dumb comment above, from an insecure critic that didn’t like the feeling. The world (humanity) is portrayed as having affected Superman in a good way. He’s the type of guy you’d like to have around in the real and chaotic world we live in. It seems to stray somewhat from the ongoing need for all actors to be shinny and beautiful like in Desperate Housewives where the odd ones out are not the top model type, talk about a desperate life…

I think that it is also one of the reasons why I also like Spiderman, not because I used to be a ‘That 70s Show’ fan. The fact that Spidermanâ€™s beloved knows who he really is, brings some reality into it. A factor (reality) that is really preposterous sometimes in Superman with his mask/glasses. It’s often played out with the audience thinking that the woman of his heart, Lois “should” realise who he is, because she’s close to him. But come on, all the others around him also need their eyes checking for not figuring it out ! I wonder whether the feeble attempt at a mask is why people feel closer to him and that lead to Superman being such a success.
Have you noticed that they never seem to have anything more than a senator in Superman (ie Clark’s dad in the TV series Smallville). There is no president and you sometimes see the army but not much.

Kevin Spacey is good but I thought he was better in other movies, it felt like he wasn’t too sure which way to play it, whereas he normally goes the whole nine yards, bridging on the performance of his life. Both Lois and Clark are well played and fit nicely in the roles. Special Effects : good and a few great parts. However for a Superman movie I would have scripted in some more superman ‘special power’ sequences, but maybe that’s because we’re accustomed to too much of it elsewhere…

It’s even down as a family movie at the washintonpost.com : “Wonderfully entertaining, occasionally profound, gorgeously designed new spin on Superman yarn is reverent, yet fresh, exploring loneliness of heroes, even echoing New Testament in non-sectarian ways”