Well I just came across this AJAX based Word Processor system called ajaxWrite that can actually read and write MS Word documents and several other formats. It is AJAX based so it just works directly in your browser, it’s really cool !

But I then realised that this was just the tip of the iceberg. There is a ajaxSketch that can read and write SVG type documents and it all just works seamlessly as you can see from the screenshots in your web browser.

I then clicked on ajaxTunes and this “is a web-based music player that lets you play high-quality streaming music straight from the Internet on any computer” Not only that but it seems to link to remotely stored music. It’s amazing !! I am impressed !
Oh and the first song that appeared ‘Breathe Me’ by Sia is also a sing I really like so these guys got everything right first time with me, bravo !

But as these guys are really good they have actually got the system working so you can add the code to your pages so I’m going to give it a try. My page will not validate anymore but it was already giving me CSS errors anyway so here goes :
Listen to Sia’s ‘Breathe Me’ right now !

Update : It works in FireFox, IE and Opera. Sia’s singing to me from my blog, this is great 🙂

I’m waiting to spend my first Euro on Apple’s iTunes !

Well I’m waiting for the French legislation to go through, that will stop them from selling in their proprietary format. That will allow me to listen to it with the mp3 software of my choice and on the mp3 player of my choice. I own an iPod and that’s it. But I am sick of not being able to play the music with or on what Apple have decided.
I pay, I choose.
I’m also sick of listening to wining idiots on poor quality tech sites that have no other comments than to crack jokes about the French. Weird that, since several other European countries started voicing the fact that they would also like this very large market player to stop taking advantage of its dominant position, they no longer know what to say or who to joke at !
Well there have been some serious articles written but they seem to have a different opinion, could it be the lack of intelligence involved with the other joke happy idiots ? The Apple business model is as always with Apple a closed model that combining factors has brought to the forefront but this may be the way forward for a more open model…

And the first song I’ll buy, will be Natalie Walker’s No One Else. The whole album may have come out by the time Apple have finally come to their senses !

Gravier says technology companies fail to realize that opening their software could create a boom for online purchases, since millions more people would be able to play downloads, increasingly on their mobile phones. “When records came out, they said it would close concert halls,” Gravier notes. “But they are still there.”

As well as a very interesting article at the Interntational Herald Tribune :

“Europe has managed to shift the debate into a conflict between citizens and digital controls,” said Peter Brown, executive director of the Free Software Foundation, a group that opposes proprietary software. “This is great because the discussion has been limited to technology circles for too long.”

If you enjoyed listening to the Pink Martini album below, Hang On Little Tomato, you may well find these links very interesting. Two recordings of Pink Martini in the KCRW studios, taken from the Hang on little tomato album :

There is also an interesting interview with Pink Martini. It’s nice to be able to put a face, or in this case faces to such a fantastic group and they all seem so enthusiastic about their music and the whole creation process, really a great interview here : KCRW Pink Martini interview.

I really enjoyed watching these, I hope you do to ! 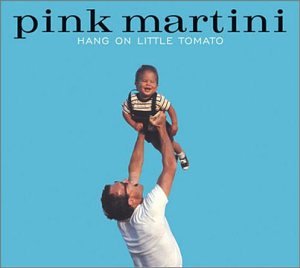 Bush explains he listens to the Beatles on his iPod. Now this most probably doesn’t sound much of a sensational piece of information does it ? The problem is that the RIAA (Recording Industry Association of America) professes that transferring a song from a CD to MP3 file ; ripping a song from a CD as they say, is illegal. The Beatles songs are only legally available in CD format and are not available anywhere on the Internet in digital file format like MP3 yet. So Will the RIAA take Bush to court ??