The French Newspaper L’Est Republicain describes a confidential report from the French secret service that in turn refers to the Saudi secret service who are convinced that Osama Ben Laden died from a severe case of typhoid. He is reported to have been in a remote area along the Pakistanian border that would have meant treatment was near impossible.
The article from L’Est RÃ©publicain is referred to in the Washington Post.

Yes pun intended, the minister from the UK government that decided to create an open environmental Wiki that ‘all’ could edit must have been reading all the web 2.0 hype about getting people involved without any authentication required. Well the result is pretty impressive in that the site was defaced and lead way to numerous jokes and sarcastic (and funny) remarks about the subject. Obviously it is highly unlikely that this was the expected outcome !

I came across several interesting articles and comments on articles in French, US and UK newspaper sites today about the foiled terrorist plot in the UK.

In Dickey’s article called “Foiled Plot doesn’t make us safer” there are several comparisons to the period leading up to 9/11 :

Panicked CIA analysts flew to Texas to brief Bush personally in 2001, â€œto intrude on his vacation with face-to-face alerts.â€ Bush sized them up, as is his wont, looking to judge the content of what they told him by the confidence with which the message was delivered. Bush wasnâ€™t convinced. â€œAll right,â€ said the president, â€œYouâ€™ve covered your ass now.â€

Presidents cover their backsides, too. If this attack had succeeded, or another one still does, the people to blame wouldnâ€™t be Bush or his advisors, the culprits would be those who limit his â€œtools.â€ Massive wiretaps? Secret prisons? The list is long.

Dickey is often insightful in his articles and this article really covers and discusses some of the key issues that are leading to all these attacks, the fact that many a Muslim most probably feels ‘under attack’ with constant images of blood and carnage in the news concerning the Muslim world.

An article on the Guardian points out that :

Downing Street admitted Tony Blair would not have left the country on Monday for his Caribbean holiday if he had known the police would need to swoop so quickly to disrupt a terrorist plot.

Further down in the article, we find out that Blair and Bush had a “conversation on a secure line” about this. Well it’s good to know that they have changed their habits.

It seems from an article on the WashingtonPost that the whole counter terrorist operation began after July 7 attacks in London, following a tip. Although all arrested are British citizens who are nearly all tied in some way to Pakistan.

These problems are being used however to silence people that don’t agree with the government or policies as an amazing article by Henry Porter illustrates. Policies that aim to stop people that encourage and participate in violence and killing is in my opinion justifiable. Policies aiming people that “have traditionally brought their grievances to those in power” and laws, in order to silence them is very “Nineteen Eighty Four” or “V for Vendetta” (for reference to a modern take on 1984). Such policies are unacceptable. It seems that like Bush in the US, Blair and his government have been busy creating policies that allow them to silence domestic grievances in the name of counter-terrorism.

Update (16 Aug): In a Guardian blog there is a rant from H. Evans about the danger of extremists as opposed to the loss of civil rights. This is following the letter from muslim leaders about UK foreign policy. There are even those who would like to believe it is a hoax.

A simple and touching video letter about the need to stop the fighting in Lebanon : 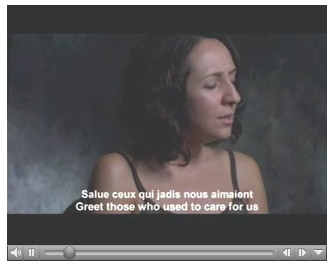 You can view it here Save Lebanon (QuickTime format)