…so Fast Company says in their article:
“Attention Marketers: 80% of Twitterers Are Narcissists” (check out the illustration 😉 )

Two Twitter happenings caught my attention. 1) The seismic effect of dear young Miley Cyrus deleting her Twitter account in order to “have a life”. 2) It seems to be a revelation for film studios; Twitter may affect box office results depending on the film, hey, they seem to be understanding what Twitter actually is!
It’s a global word of mouth booster, which kind of means that, yes you are not under the spotlight, you are under multiple spotlights, to the extent that everything is amplified at will. When a film is good, guess what, people talk about it, and I will trust (or avoid in some cases) a friends comments on a film far more than any journalist. Twitter just allows people to spread the word to lots of people quickly, maybe even people will tweet while watching the film…
So people that have thousands of followers, just cry out ‘narcissist’ for me, and are invariably comprised of celebrities telling people they have just been to the shop! The exception is the 20% that actually have something interesting to say, and funnily enough, don’t always have thousands or millions of followers.
A few articles about the Miley Cyrus Twitter account being deleted event also pick up the fact that Twitter is not really extensively used by her current target population / fans.

But the main thing is that the companies like Twitter, be they Facebook or Myspace have taken the same approach as Google:
– We will provide you with the tools and you (can) create the content.
– A footnote says “oh and by the way we’ll make money from selling adverts on your pages so don’t worry the service is free!”

‘Giving’ these tools to the crowds has changed the channels advertising agencies and marketing departments are used to. Listening to people who discovered the internet (and the web etc.) 2 or 3 years ago and explaining it to either of the above is at the moment like the blind leading the blind.

I’m astonished when I hear people saying that the social media technologies allow companies to engage the consumers. I think companies will find that social media technologies have given consumers a real voice. A voice that can get very loud. So if you are trying to sell a product that is not bad and your marketing team is promising to make it a success this is where the global word of mouth effect (like Twitter) may be waiting to bite you and any ‘engaging effect’ may only last a few seconds…

Sure you could find (or pay) narcissist Twitter gurus with millions of followers to say your product is great. But wouldn’t it be better to make your product around what consumers want. Not everyone can take the Apple stance of saying we don’t do user testing we make great products…
If you take a look at the article on All Facebook about Honda’s attempt to sway people towards the new Accord Crosstour you’ll see that the idea of using tools in a concealed fashion makes people think you believe they are tools! The big no-no of course is to try and erase comments perceived as an attempt to silence people. Being open to feedback (criticism) is in my opinion the sign of a company that is really trying to provide customers with the best possible service / product. Hey there are millions of companies that still pay enormous amounts of money to get customer feedback rather than using the web.

The social network with systems like Facebook have unleashed the word of mouth. Creating an interesting and valid buzz around a good product will unleash the crowds. Try to trick them and you will be drowned by the wave of mistrust. The same people that are creating the above events like the Accord Crosstour are often the same that complain the Facebook, Twitter et al. aren’t raking in the money because they do not understand the systems and are unlikely to understand their potential if used properly…

Joel Cohen, Warner Bros.’ executive VP and general manager, tells the Sun: “We may be putting too much weight onto the Twitter Effect. But you can see Twitter’s benefits as a communications tool that spreads the word about a film, and the negatives have yet to be proven.”
Source: econsultancy.com

A very interesting video presentation from AIIM that discusses various interesting topics including that of how Content Management and Enterprise 2.0 helped Obama win the presidency:

This is the explanation provided on the blip tv site (weird player I must say but hey it does the job):

Re-recording of John Mancini’s keynote presentation at the Info360 show. The focus was on applying lessons in the use of E20 technologies in the campaign as reported by Garrett Graff in Infonomics magazine (http://www.infonomicsmag.com) and by SocialMedia8 on Slideshare to any E20 or social networking implementation.

So Google was one of the first large companies to actually use cloud computing extensively and now, as usual in the English language, there is a move to talk about ‘the cloud’, dropping the more geeky ‘computing’ part! Like other buzzwords, take web 2.0 or SaaS (Software as a Service) not everybody has the same definition. It is highly likely that some people will say that ‘could computing’ and ‘the cloud’ are two different things.

Seamless access to hardware and software: the Supercomputer
The main idea with ‘the cloud’, from an IT perspective, is to seamlessly supply extra resources to providers of IT services and by ricochet to end users of these services. Even though it is not a behemoth word like sustainability that continues to suck in so many different meanings, cloud computing is likely to evolve and cover more and more services. Hey it could even end up being synonymous with the Matrix type concept from the film!

In the case of IT infrastructure, people are interested in outsourcing their hardware needs which can be covered by what is called HaaS (Hardware as a Service). One of the most well known services of this type is Amazon’s Elastic Computer Cloud or EC2.

Does this remind you of passive terminals that connect to supercomputer?! It is not a coincidence that equipment like Netbooks are so successful in the current context of more and more key services, instantly available on the internet. Cloud Computing can help provide further such important services to people. The Cloud services currently available and Netbooks are however far more complex than the mainframe and passive terminal model.

HaaS and SaaS
The Cloud services provided can be viewed as building blocks. Both HaaS (Amazon’s and Google’s server farms) and SaaS type applications (like Google Docs, Salesforce.com and Sliderocket) are purchased without needing to worry about the risks involved in evaluating growing usage. In this sense cloud computing is also referred to as “on demand computing” where you just purchase the system and someone else worries about your evolving needs.

Utility Computing & Server Virtualization
If you are aware of solutions like VMWare that allow you to run several virtual instances of a server on a physical server, then you will quickly see the similarity with cloud computing whereby clusters of servers can provide hundreds of instances of virtual servers. Google’s need to ‘crunch’ huge quantities of data, which requires highly knowledgeable people in cloud computing or grid computing. Like Amazon, Google is now offering the public some of the cloud computing services that used to be restricted to their own projects and internal service requirements.
The ability for companies to tap in to this cloud of both services and hardware (data centers) in the same way you would just turn on the tap or the light, provides powerful and efficient “on demand” services and resources a bit like a utility grid hence the idea of utility computing.

The Cloud is in its infancy but is already proving to be an extremely efficient solution for small to large companies and even the general public though services like Google Aps etc. Could computing is also likely to take on many new meanings along the way

Take a look at the following video where numerous tech celebs explain what Cloud Computing is (audio is a bit shoddy though):

Let’s all shout loud and clear that we have had enough of having to cater for Internet Explorer 6, the quirks, the endless limitations and overall reduced user experience. Found this on Bowman‘s site. It is a link to a manifesto / petition to encourage people to move away from IE6, get a life and make the life of people creating HTML just that much easier and interesting for end users. IE6 does not comply with any standards other than those of Microsoft and now more than ever just hinders user experience in general. So please spread the word about the issues that IE is creating.
Do check out the site. It looks great and has a wonderful quote from Jeffrey Zeldman, (I translated his witty article Web 3.0 a while back):

“IE6 is the new Netscape 4. The hacks needed to support IE6 are increasingly viewed as excess freight. Like Netscape 4 in 2000, IE6 is perceived to be holding back the web” 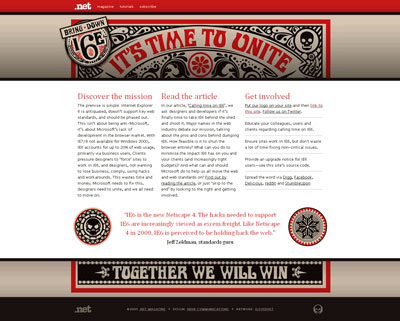 Hilarious note: Pierre from work, has the same unfortunate task as myself, of having to spend ages testing and modifying HTML templates so they will work in IE6. Take a look at this very funny set of IE6 splash pages, Pierre sent me: http://blog.hugsformonsters.com/post/87657240/overly-judgemental-ie6-splash-pages