I was curious when I came across Snapmania’s Tourist Remover. I thought now how on earth can they guess what is behind the tourist and fill it in.
The system actually relies upon you having several (for a better result) photos of the same place. This way it takes the photos and uses each to patch together a final photo without the unwanted tourists walking by like here when you could be taking a picture of a Ferrari : 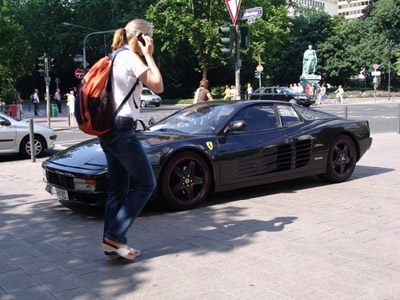 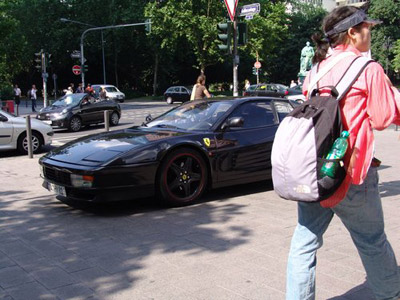 And after using the Tourist Remover Service, voilÃ , your final photo without a single tourist in site : 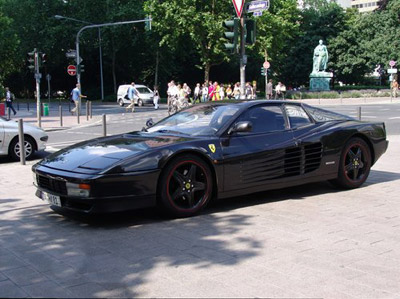 Check out the free service for yourself

I’d had this problem before and it still seems to come back and bite you. Internet Explorer 6 is still going to be around for a while so you can’t just ignore it.

I was at one of my best mates, showing him a personal site I’m working on.
As you can see below the initial state of the menu is all grey. When you move it’s supposed to bring the menu to life with colours 😉
However from State 0 (initial state) to State 2 (expected effect) there is an intermediary state in IE 6 State 1, where the little (icon) column preceding the menu elements is not visible, but should be!

The flicker effect in IE is consistent. Every time you hover over the image it calls the server to download a the hover state image once again. So if you go up and down a menu with 5 elements twice IE 6 will go and fetch the hover image 20 times !

I initially started with the column, preceding the menu elements, slightly smaller. Then I tried to do a cross type icon for elements with sub menus. The problem was that it looked like a RIP symbol so I moved back to a square type icon. I realised I liked the taller column (without the horizontal line) and kept a smaller (square type) one for the ‘active’ click by mistake. The active effect, moving from the tall to the square column, looks nice so I kept it like that.

I remembered having come across a fix for this on a previous site that required a few lines of code in the httpd.conf or .htaccess

You can also use “access plus 1 month” for example…

If you have access to the httpd.conf (I couldn’t get this to work via a vhost file) then you can add :
LoadModule expires_module modules/mod_expires.so

This ‘should’ stop the constant calls to the server. There may be an initial case of the image missing on the first hover (before it has loaded the image) but then it should no longer call the server for each hover.

Code was found at Dean Edwards, the IE guru and a comment posted on Jon Hicks blog in an article about a menu that wasn’t behaving…

A word of advice : if you are developing a site, test this and then comment it out until the site is finished. It’s highly likely you will ‘have’ to refresh the page by using a force refresh page each time you change any images. And sometimes you forget and then discover the changes when you restart the browser. Although that seems to be necessary in Opera 9 all the time anyway ! PS : Opera 9 is still my preferred browser, maybe until FireFox 2 ?

One other thing I noticed with Opera is that the animated gifs that have been defined to cycle though the frames in the animation say seven times like the one above start all over again if you page down and then back to the animation. It’s a kind of now you see it, now you don’t thing that cleans the slate of the animation. Not really always desirable and I feel it counteracts the whole concept of defining how many times an animated gif should loop !

There is a fascinating article about human evolution at the washingtonpost.com that explains how human genome research has helped understand specific changes in the human DNA around the world :

This quote hit home with me since I sometimes feel I’m the odd one out with everybody being really intent on a ‘nice tan’. Frying under the sun is not something I really participate in that much :

Europeans, for example, show strong changes over the past 10,000 years in genes that affect skin color — as humans moved into northern Europe, where there was less ultraviolet light, there was a strong evolutionary advantage to having lighter skin to allow in more ultraviolet light, which is needed to synthesize Vitamin D.

I find it incredible to read information about myself that is so profound, you’ve really got to love Internet for that…

The impact we have on our environment is a hot debate. Scientists, like those that lead research into human evolution quoted in the article, have alerted us to the disastrous effect we have and are having on the world and environment we live in. It seems that our body is far more intelligent than we thought. It is adapting to these occasionally drastic changes. Iâ€™m not sure whether the idea of our bodies adapting to the decrease in physical exercise and the increase in food consumption is good. Turning that trend around might be a far better idea !

On a humorous note (which can be expected over at blogjam.com) there may be a solution to the English hangover issues. This is not really evolutionary since the English have been drinking for a long time and this hasnâ€™t really changed much, LOL 😉 As explained above it seems a good idea since it also takes into account the evolution of Europeans with the availability of the enzyme lactase!

In a futuristic article, Fortune discusses the way research in to reading and interpreting brainwave activity, has lead to conclusive initial experiences that allow the brain to replace the mouse for basic functions.

Science Fiction Novels have often given us images of a future with voice controlled and complex computer systems providing valuable services and functions. Fewer have portrayed humans interfaced with computers via brainwave patterns alone. It is true that the thought of having to have a chip implanted in your brain to do so is a pretty scary thought. The idea that such an interface could be accessed by computers other than the one(s) intended, chills you to the bone. The mere notion of a virus capable of creating havoc with a human brain through such an interface is a nightmare.

But the advantages that can be gained, as well as less obtrusive methods that are appearing without the need for implants is fascinating:

Last year, Sony took out a patent on a game system that beams data directly into the mind without implants. It uses a pulsed ultrasonic signal that induces sensory experiences such as smells, sounds and images.

There are also far more useful examples in the article where quadriplegic patients can communicate via such systems and a chip that could be able to “process thoughts as fast as speech – 110 to 170 words per minute – by 2012”.
“Stu Wolf, one of the top scientists at Darpa”, describes the mind enabled systems like these : “network-enabled telepathy” which is disturbingly close to the storyline of the film ‘Matrix’.
Let’s hope that the top scientists and researchers alike provide us with safe and useful devices that will make our lives easier and secure.

A related article at the washingtonpost.com explains how “scientists at Stanford University hope to allow patients one day to complete actions without even having to think about the action itself.”

This obviously all sounds beneficial on the whole and far better than the reports that have been published about how cell phones affect the brain.