What is next in blogging, please...

By    John Garner on  Sunday, September 10, 2006
Summary: Taking a look at the online photo industry may well give you the answer... If you look at the new battle between Flickr (Yahoo) and Picasa (Google) then you could be faced with what will be happening soon in blogging. Google is putting the heat on Flickr with its Picasa 2 beta that I have […]

Taking a look at the online photo industry may well give you the answer...

If you look at the new battle between Flickr (Yahoo) and Picasa (Google) then you could be faced with what will be happening soon in blogging.
Google is putting the heat on Flickr with its Picasa 2 beta that I have recently been testing. This is a trend setter in online photo sites...

Picasa 2 is not on their web site ! It is Windows based application/software we are talking about (also available for Mac OS X 10.4 or later). You download it and install it on your PC. The current stable version allows you to organise, edit, share your pictures (using extra software called hello) via email, instant messaging etc. It is extremely easy to use. If someone told me it was Apple software ported to PC I would understand better why it was so user friendly. It has been available since mid-summer so Picasa 2 beta is not the news here.

The version 2 beta of Picasa lets you upload pictures from your PC to your Picasa web album.

So you're thinking that sounds cool and all, but what does this have to do with blogging ? Well everything. As I'll explain now the ease of use and simplicity readily available on your computer is a real winner...

I realised when I opened an account at Flickr for my Dad that it was far too much for him. He looked on, wide-eyed, trying to follow the steps I indicated to him about uploading pictures and then organising them in sets. I knew he used the current stable version of Picasa and loves it. I understood I was faced with a dilemma.

Do I create a Picasa web account and show him how to use it and drop the advantages of Flickr ?

Or do I continue with Flickr, knowing that my Dad will probably not feel courageous enough to use it ! Hint to Picasa here about changing this maybe so that I will have no reason not to use Picasa ?

As you can see below I have the set of photos I selected in Picasa on my PC, and in less than a minute my pictures are up on the Picasa web site !

This is the initial Picasa page with my set of travel images, I click on "Web Album" : 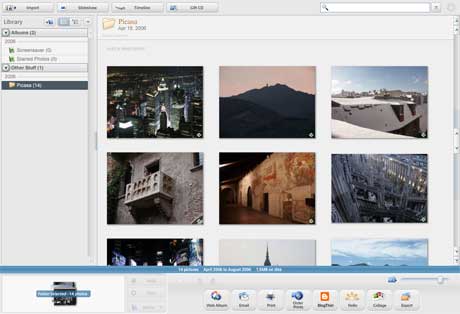 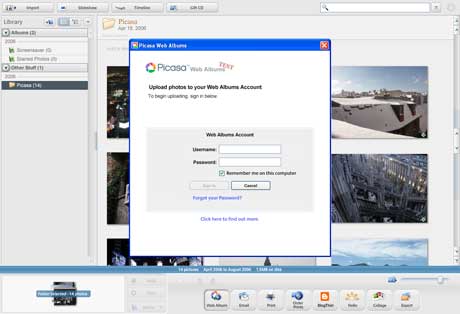 Next, Picasa starts uploading all the selected photos (you can choose what size to upload) : 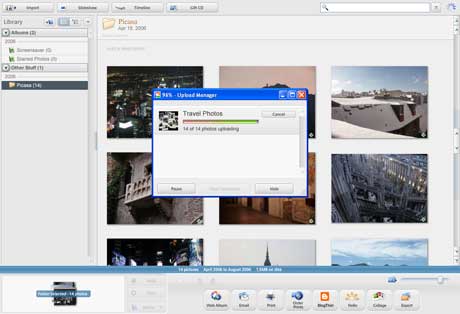 And here are the uploaded photos on Picasa.

This is where the comparison hit me !

Blogging is the same. Until there is an application to create blogs which is as easy to use as Picasa, people will shy away from great systems like WordPress, Movable Type, Blogger etc. Note I said "as easy to use". You need to have used Picasa and see how easy other people find it to use.

I'm not talking about changing the look of your blog, nor about the Tiger Admin from orderedlist.com which does wonders for the WordPress admin panel. I'm talking about a piece of software that you can download and runs on your PC, allowing you to create your post, preview it and then upload everything to your blog.
What is needed is a piece of software like Picasa 2, very stylish and trendy, but most of all, simple to use and understand. My Dad took to it and likes using it, he was really enthusiastic about it, so it is something worth writing home about !

Making blogging easy will be a winner. People like me, who design sites, code new stuff into their blogs and use beta versions of skins/presentations for blogs like K2 are a small percentage of the population.
A successful system will need to think about the majority of the population that will find the WP admin panel or any other web based panel system currently available so daunting they'll rarely use it so they'll rarely blog.

So Iâ€™d like to call on Google, Yahoo or Apple to create a piece of software for blogging (for PC, Unix & Mac) as described above, with maybe a spell checker, saving draft versions and uploading everything automatically to the blog of your choice. You'll find people will not only blog but they'll blog about your cool software and tell all their friends about it. We'll have a blogging star system. For the VC lot among you, yes this means either a star or maybe even a cash cow !