One of the best French TV series I have seen in years has just started with a second season in France. My sister is watching it with her future husband and gave away the premise for the new series : something is found burnt up in the boot of a car. Well if you watch the trailer below you will get more information than that (so beware the people that like me don’t like giveaways) :

The BBC had bought the series (first season in 2006) and do not often buy French series so shows how good it is as the BBC can do some great series themselves : http://www.bbc.co.uk/bbcfour/cinema/features/spiral.shtml

A few nights ago I discovered that the whole station at Angel had been redecorated by Magners and it was a pretty impressive experience. Not just because I must admit I quite like the drink on the rocks ! 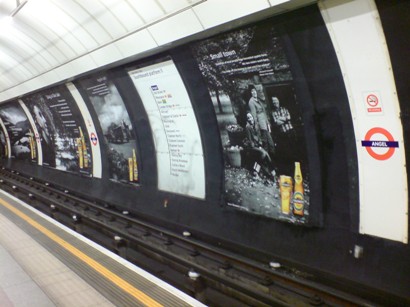 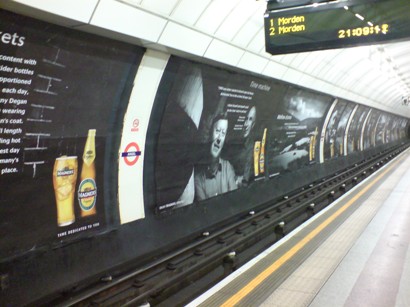 Yes I know, another late night at work 😉

The series “Saving Grace” from TNT who are behind the other great series “The Closer” has a great soundtrack to it from Everlast. While it lasts here it is on YouTube sorry GoogleVideos… :

The series stars Holy Hunter and is one of the recent ‘original’ series that survived the Hollywood scenario strike and rightly so. Even if it can be considered gritty and one can question the need for so much boozing and smoking to give a realistic shine, it is a great show !

The heroineâ€™s strong character can be an addictive initiation but her troubled and unconventional relationships have her leading a pretty solitary existence even though she may be surrounded by friends. Itâ€™s only when the story unravels that you realise that her torments are well and truly a dark burden that would drown â€˜many a manâ€™, resonating her strength and determination, not just a self pitying and lost soul.

The song that you can listen to in the video clip above is really successful in providing the series with a ‘soul’ !

So pretty, and oh so bold
Got a heart full of gold on a lonely road
She said I don’t even think that god can save me

Deal the cards, and roll the dice
Sex, drugs and rock & roll are my only vice
Tryin to figure out just what’s hereafter