TestFreaks have written an interesting article about the different unknown areas of Vista that may provide you with essential opportunities to further the operating system for you.
Some nice functions covered are for example:
– Managing Your Documents
– Personalizing Your Folders
– Teaching Your Computer to Listen
– Protecting Files
– Organizing Your Music
– Internet TV

While you are waiting for the next version of Windows, don’t forget to take advantage of Vista.

Just came across an article by Julian Sanchez that explains what the glyphs mean that are used in the TV series Fringe just before adverts. The below picto was created by FringeTelevision.com, it illustrates the glyphs used and already looks superb.

As expected, with JJ Abrams, who hooked me with Alias, the concept is brilliant, engaging, and could prove to be just as interesting as his series Fringe.

So if you were to list the functions you would like in a USB drive what would it be?
Here is my list:
1) Small and not bulky, not heavy, easy to transport, can fit in your pocket
2) Large capacity, at the moment that would be 128 Go
3) High speed read and write capacity ( > 30MB read and > 20MB wite per second)
4) Biometric user authentication (fingerprint)
5) Hardware based data encryption
6) Backup via Internet of data (incremental backup, versioning) when connected
7) Shock proof, water, temperature and magnetic protection, with a lifetime warranty
8 ) Nice sleek but simple design (maybe titanium for extra protection and light weight) without a cap or with a cap that is attached and can’t be lost, fall off.
9) The ability to run an OS or software from the drive and or use as a memory booster
10) Maybe a short range beacon type system or even a GPS system that can be activated if it is lost, to quickly find it
11) For the paranoid a wipe or even remote wipe system, should the key really be lost and if it has confidential information on it. I guess this would need a small battery power source that triggers ths should it be tampered with or to allow for the GPS function if not connected to a computer.
12) It could serve as an RSA type system that randomly generates a number. This number when combined with a user id completes a login identification process

Edit: I was just checking out the comment from Steve below concerning the 64 Gig USB Key from Kingston and came across an advert for the “IronKey”. It seems that quite a few of the items from the above wish list can be found in the IronKey USB key coined as being the “world’s most secure USB key”. Looks pretty impressive take a look.

Below is a multipart documentary about John Rendall and Anthony ‘Ace’ Bourke who purchased a lion cub from Harrods in 1969. They brought the cub up in Chelsea, London near Kings Road. Following a chance encounter with Virginia McKenna of the 1971 hit film ‘Born Free’ they were able to envisage taking the then young lion back to Kenya to release him to the wild.
It is a moving and true story that is well worth watching. The story has become a web phenomenon with the video having been viewed on YouTube by an estimated 50 million viewers worldwide! 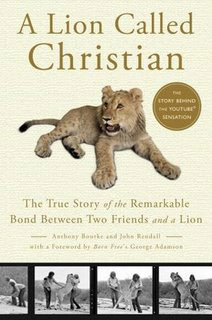 In 2008 an extraordinary two-minute film clip appeared on YouTube and immediately became an international phenomenon. It captures the moving reunion of two young men and their pet lion Christian, after they had left him in Africa with Born Freeâ€™s George Adamson to introduce him into his rightful home in the wild.
A Lion Called Christian tells the remarkable story of how Anthony â€œAceâ€ Bourke and John Rendall, visitors to London from Australia in 1969, bought the boisterous lion cub in the pet department of Harrods. For several months, the three of them shared a flat above a furniture shop on Londonâ€™s Kingâ€™s Road, where the charismatic and intelligent Christian quickly became a local celebrity, cruising the streets in the back of a Bentley, popping in for lunch at a local restaurant, even posing for a fashion advertisement. But the lion cub was growing up–fast–and soon even the walled church garden where he went for exercise wasnâ€™t large enough for him. How could Ace and John avoid having to send Christian to a zoo for the rest of his life? A coincidental meeting with English actors Virginia McKenna and Bill Travers, stars of the hit film Born Free, led to Christian being flown to Kenya and placed under the expert care of â€œthe father of lionsâ€ George Adamson. Incredibly, when Ace and John returned to Kenya to see Christian a year later, they received a loving welcome from their lion, who was by then fully integrated into Africa and a life with other lions.