The Economist is carbon-neutralized. The magazine decided that for its 16 page ‘Green’ section it would make a difference, not just in words, but in actions.

The idea sprang to life in the latest edition of The Economist, with a special environment section called “A survey of climate change”. The latest issue of the magazine has been carbon-neutralized. The Economist calculated the impact on the environment that the process of publishing this month’s issue would have, “so Carbon Neutral could trap the equivalent amount of carbon dioxide (118 tons) in a U.S. mine as a way of neutralizing the emissions created by producing the magazine — cost about $1,200.” (Ad Age) 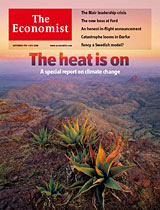 When interviewed, Emma Duncan, Deputy Editor of The Economist, explained that advertisers were quick to jump on the idea of participating in this month’s issue, especially companies that are keen on getting an environmentally friendly message across. They even got ads from companies that rarely advertise !

However the Economist not only took a bold step on this issue, the whole section was nearly all produced by Ms Duncan. Her work spanned over a four month period, travelling around the world to write the various stories that appear in this special section. The Economist found a novel and highly appropriate way of getting the message across. Savvy to on-line trends, they have a podcast interview of Emma Duncan that you can download or play directly from the site.

â€œWe need to think about climate change maybe as individuals think about insuring their houses: you spend maybe 1% of your annual income insuring your house not because you think it’s going to burn down, but because if by any chance it did burn down, the consequences for you would be disastrous.â€
Emma Duncan, Deputy Editor of The Economist

So it’s an all round thumbs up for this prestigious magazine that will hopefully provide full access to their content soon.

I have just published an article that covers the subject of testing your site/pages and the compatibility with different browsers, several different services and solutions exist. I aim to cover as many solutions as possible in the article. 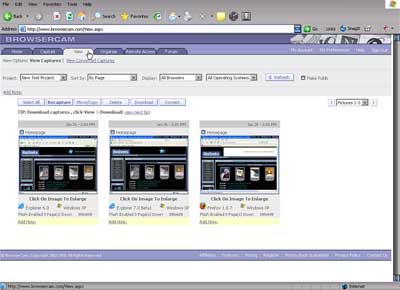 A screenshot from the Browsercam tutorial.

Well I just came across this AJAX based Word Processor system called ajaxWrite that can actually read and write MS Word documents and several other formats. It is AJAX based so it just works directly in your browser, it’s really cool !

But I then realised that this was just the tip of the iceberg. There is a ajaxSketch that can read and write SVG type documents and it all just works seamlessly as you can see from the screenshots in your web browser.

I then clicked on ajaxTunes and this “is a web-based music player that lets you play high-quality streaming music straight from the Internet on any computer” Not only that but it seems to link to remotely stored music. It’s amazing !! I am impressed !
Oh and the first song that appeared ‘Breathe Me’ by Sia is also a sing I really like so these guys got everything right first time with me, bravo !

But as these guys are really good they have actually got the system working so you can add the code to your pages so I’m going to give it a try. My page will not validate anymore but it was already giving me CSS errors anyway so here goes :
Listen to Sia’s ‘Breathe Me’ right now !

Update : It works in FireFox, IE and Opera. Sia’s singing to me from my blog, this is great 🙂