It seems that Lyle’s Golden Syrup has acquired the status of brand stardom since the Guiness Book of Records has officially recognized it as as Britain’s oldest brand ! 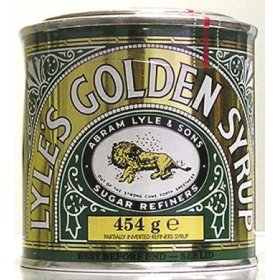 Should you have suddenly acquired a craving for golden syrup just looking at the tin, then you’ll be happy to know that you can purchase some through Amazon.

As an article in the Daily Mail explains :

The Lyleâ€™s story began in 1883, when Scottish businessman Abram Lyle built a sugar refinery in London.

A by-product of sugar was a treacly syrup, but it was canny Lyle who discovered it could make a tasty spread.

This syrup was poured into wooden casks and sold to his workers and local customers.

Word spread fast and, in a few short months, a tonne a week was being sold.

Lyleâ€™s Golden Syrup was first poured into tins in 1885.

This site uses Akismet to reduce spam. Learn how your comment data is processed.